In Which I Bake Bread

In Which I Bake Bread


I am very late to hop onto the pandemic shelter-at-home bandwagon of baking my own bread.  For some reason I had no interest in it until just a few weeks ago, and I was only interested in a plain sandwich loaf -- no fancee artisan loaves, no sourdough that everyone else, for some reason, seems to have been obsessed with baking.  Just plain white bread (I'm not a philistine; no, really).

I wanted something simple and basic.  Flour, water, yeast, salt, two rises, bake in loaf pan, and voilà, bread.  So I read some recipes and watched some videos.  Here's what happened.

First loaf: beginner's luck.  I encountered several bumps in the road: the water was almost too cool to proof the yeast (my pinkie finger is an unreliable thermometer, apparently); the dough was way too wet and sticky at first because I wasn't careful enough when I measured the flour; the dough didn’t quite double in size during first rise but the day was wearing on and I thought I'd plunge ahead anyway and take my chances.  But I managed to pull it off pretty well in spite of all that. 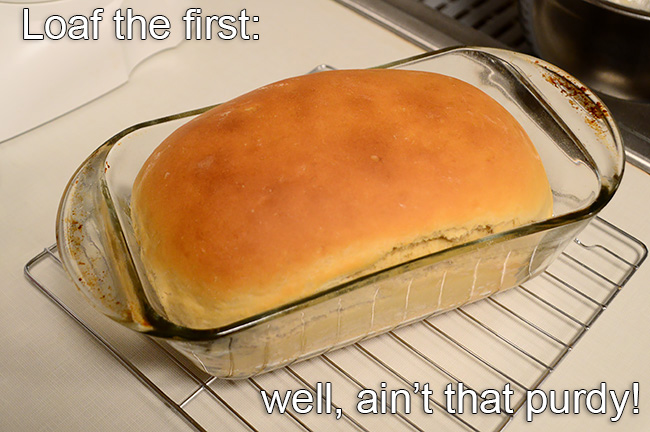 A week later I tried again, using a thermometer instead of my pinkie to assess the water temperature before proofing the yeast, and using closer to the right amount of flour (it was humid, and I may have overcompensated by overflouring the board while kneading).

The yeast proofed pretty well and the dough rose well, punching down with a satisfying whispered whoof, but I had a bit of trouble forming it into a proper loaf shape, and it came out looking weird. 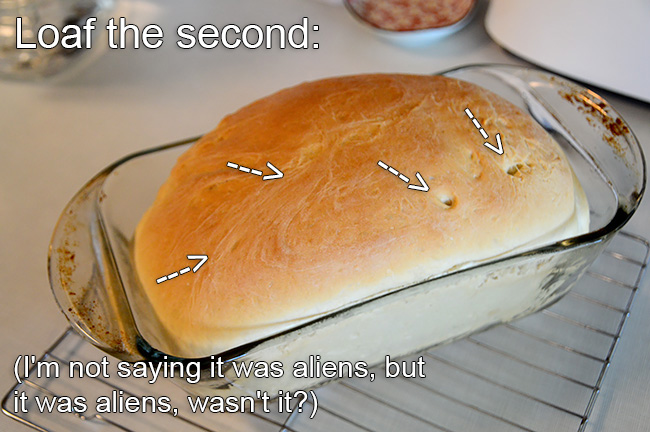 In spite of its odd outer appearance, the interior crumb was finer and more cohesive than the first loaf, and the flavor was even better, in part I think because I used less sugar.


Another week went by, and another attempt was made, focusing more on precision, adding the wet ingredients to the flour rather than the other way around, and also using 2 teaspoons of sugar for proofing the yeast, instead of the 2 tablespoons I used previously. 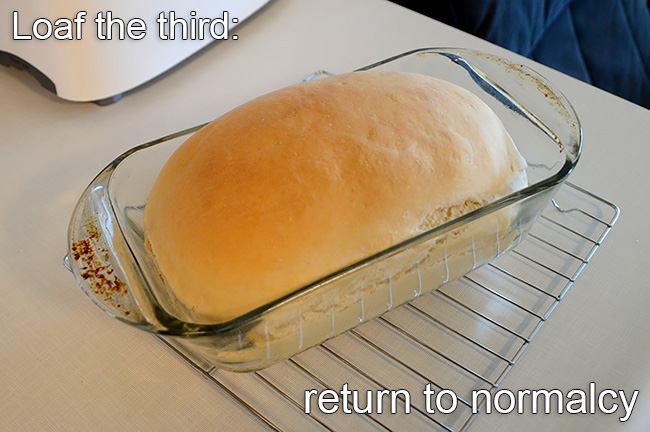 It came out normal-looking, which was a relief.  The crumb was good.  It tasted a little chalky, though, because I probably cut back too far on the sugar.  It's good toasted with almond butter and orange marmalade (they cover up the chalkiness).


Now that all my yeast packets have been used up, I'm not sure if I want to continue baking my own bread or not.  Kneading seems to be a challenge for me, and my results were too inconsistent from batch to batch.  Since I couldn't achieve steady improvement with each batch, I am not motivated to continue to experiment, given my health issues, the difficulty with standing on my feet for more than 2 or 3 minutes, and the need to refrain from physical exertion in general.  I guess I'll go back to buying bagels from the store for my carby needs (and restrain myself from looking up bagel recipes).